My childhood was spent growing up on a farm. I then left the farm environment and brought a house in Hatfield,  Herts and this was soon kitted out with pens in the garden and I started fostering for the Cats Protection League , earning a reputation of being an animal lover taking in anything that I could , to help.

Its amazing how many animals you can fit into your 3 bedroom house with a bit of organisation but it was always the dogs that found there way into my heart more. I had to admit defeat and approx 10 years ago I moved back to the farm I grew up on , in Hertford and am now lucky to own alot more land to accommodate my passion.”

“I have had a varied work history but notably the last 10 years working for the Metropolitan Police Service as a frontline Police Officer until I left at the end of 2012.  I was always called upon to engage in any animal incident and “acquired” a few rescued pets on the way , notably the parrot that became my operator for the night shift and the goldfish that I rescued from a crime scene and had to put in an evidence bag until I got him home !  Of course , not forgetting the horse found wandering on the A406 that ended up in my front paddock on the farm for a short time and naturally numerous dogs that I have found no owners for and unless some magic was performed, they were facing going to the dog pound and potentially  being put to sleep, so of course I have always been a part time magician as well !!”

“Throughout all the madness and comings and goings of all sorts of animals over the years ranging from skunks to llamas, my passion has really always been dogs, and the dog that always won hands down were lurchers ( I run a seperate rescue…www.lozzaslurcherrescue.co.uk…..until I discovered PODENCOS…

About 7 years back, I saw a photo of the most stunning dog I personally had ever seen, its looks blew me away and I had to know what it was……That day my love for podencos was born…..I promised myself that one day when the time was right I would own at least one of these wonderful dogs…..I didn’t realise that 18 mths later, my life was going to change and I was going to start up a lurcher rescue and now with the experience gained from that and having built up trust and a reputation , the time was right for me to do my bit to help these mind blowing dogs….. 🙂
So I was introduced to a lovely lady called Angela Stacey who runs Little Pod Association based in Spain with her daughter, Marie. She came round for tea and cake and had a look around the rescue and we forged a partnership, where we agreed,  that LLR would take a podenco from LPA and rehome in the UK. I didn’t want to bring lots of dogs over , so agreed it must be one at a time, allow them to be assessed fully and the right home found, once they were settled into their forever home, then the next one would come over.  I then set up a podenco group especially for keen pod lovers to be part of and I felt that it had to be separated from the normal LLR fundraising etc. The facebook group is https://www.facebook.com/groups/459425450866123/  if anyone wishes to join….
Now one thing anyone that knows me, will tell you , is I LOVE 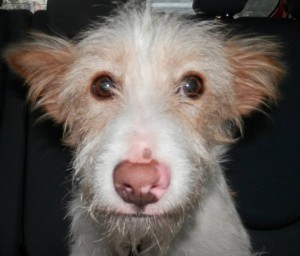 hairy dogs, so the more  coat the better and people who want the
rescue’s assistance are getting wise to this so will present these
gorgeous creatures to me, knowing there is no way on this earth
I could say no…..So look at the face of the stunning Kira, who I
was casually asked if I would like to help….!! Err does the pope
prey ???? lol…
On March the 13th 2014 , she arrived very safely with Angela who
had transported her over and into LLR’s care….Well to be fair it was
doomed from the start…..the moment I saw the ears…. 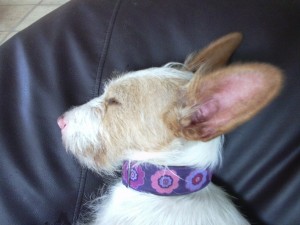 so after convincing myself that I must be strong and rehome her, after precisely 2 minutes, I had failed miserably and there was no way I was ever going to be departed from her….So my gorgeous Kira is now a resident dog and the most fun dog I have ever owned, well was until Jack arrived..….. Luckily the rescue hadn’t done any fundraising at the point so she was paid for by myself, with a generous amount of help from LPA who were very happy she had found her forever home here…..
It was time to think of the next one and no sooner had I started to 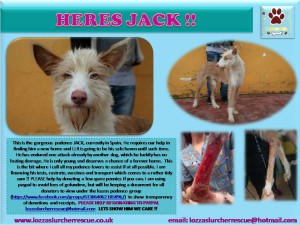 look around to see who the rescue could help , a lovely lady called
Anne O’Connor who I have known for a while through our love of
pods, contacted me and asked if I could help this poor boy Jack
who desperately needed a home and had been waiting months..
There was no way I could say no to THAT handsome face and so
fundraising started and the following super people all personally
donated to get him over here…….Niki Armstrong, Anne O’Connor,
Jacqueline Baker, Jean Peters, Angie Paterson, Gill Rayfield,
Theresa Hughes, Denise Monckton, Janice Rhodes, Liz Hockley
Sharon Gebhard, Jenni Shaw,Janie Simmonds, Ann Waller,
Gillian Arger and Alli Anderson and with the help of the most
kind and caring lady in Spain, called Sara Valles Martin who did all
the hard work that end , he was transported over by Dan and Sarah from
Animal Express. Jack is a wirehaired Ibizan Hound (Podenco Ibienco) .. Jack after a failed rehome, wanted to come and stay with me permanently and of course, it was just meant to be !
Since Kira and Jack, landing, we have helped, Rupert a handsome tan and white podenco boy, Bonnie a beautiful brindle galga pup, Felix a stunning tricoloured hairy lurcher mix and Yogi a sandy hairy podenco and they are all settled now in their forever homes…  That was it, it then time too launch a seperate entity, as the pods , deserved their own platform….hence Lozzas Podenco Rescue was launched….
“Currently I own 3 gorgeous girls, Maddie (lurcher)    Hettie (podenca)   , Kira (podenca) , Fifi (mongrel) and Perri (Mop brush !)

JACK, MY HEART DOG AND SIMPLY PUT MY SOUL MATE WAS PTS 18/09/2018 AND IN HIS MEMORY I BORROWED THE MONEY TO BUY A WONDERFUL WOOD WHICH ALL THE RESCUE DOGS CAN HAVE HOURS OF FUN IN AND HE CAN LOOK DOWN AND IMAGINE WHAT FUN HE WOULD HAVE HAD WITH THEM………LOVE YOU JACK (THE MOST AMAZING IBIZAN HOUND)  TO THE MOON AND BACK AND ALL OVER AGAIN XX

I have many years of personal experience of owning dogs and have completed courses in Dog Training with the IMDT and I am currently studying a Dog Psychology degree . I certainly don’t claim to be an expert in anything, however having now been running a sighthound rescue for over 7 years , I have had more than my fair share of  dogs in my home direct from a stressful environment, ie the pound and intergrated them successfully into a pack pr direct into our kennels , so  feel that I have a good grip on things and have encountered the majority of problems. ”

“I have  also studied Tellington TTouch which I personally endorse along with ThunderShirts for many problems with dogs. In addition I am a convert to 2 point contact harnesses to balance a dog and stop unnecessary pulling, this was bourne from when I viewed this photo after a dog walk…haha…” 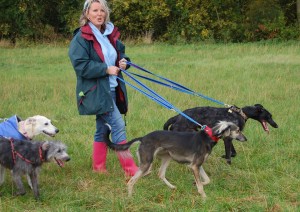 “I have a huge heart and sound mind (most of the time!

) and simply want to help where I can to save podencos from the terrible suffering and plight they endure….